After four days of late nights and early mornings, and a plane ride home first thing this morning, the last thing I wanted to do was run. From the moment I woke up (at 5:30 a.m.!!!) I was thinking up every excuse in the book as to why I shouldn’t run: I’m tired. I’ve got a headache. It’s hot. I didn’t have a good fuel dinner last night. I don’t like running after lunch. Etc. Etc. But no matter how much I yawned, and no matter how much my eyes fought to stay open, that niggling, (possibly evil) little alter ego of mine would not let me crawl into bed. Sunday runs are not like the recovery run I missed on Thursday, the little devil told me, or the get-loose-and-limber run I missed on Saturday, they’re long distance runs, they build up my endurance. Mess with these runs, she said, and you’re messing with Portland.

FINE! I put my running gear on, grabbed change for the Skytrain, and headed out to Waterfront Station, again dozing in and out of sleep the whole ride there.

What do you get when you mix narrow lanes, with oblivious, selfish, arrogant walkers, with dog owners who don’t know how to reign in their damn extendable leashes? The Battle of the Seawall baby!

I love the Vancouver Seawall, don’t get me wrong. It is one of the most beautiful runs Vancouver has to offer with the ocean and the beach and the lighthouses and the cliff-like rocks and the totem poles and the Vancouver skyline and so much more. But that being said, every time I run it, there’s an ounce of fear clouding my experience … and probably jacking up my adrenaline a bit too. 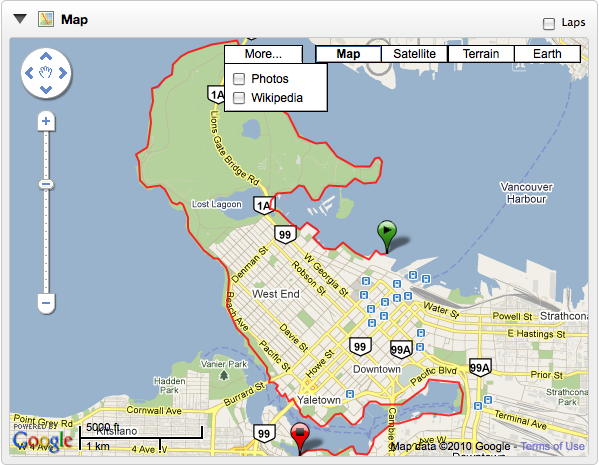 A few years ago, when I was training for my first half marathon, and was three weeks away from race day, I ran the Seawall. At about 15 km into the run, I noticed a guy in the walk lane who’s yappy little dog had jetted over to the bike lane. I was a bit of a distance away when I first saw him, and was figuring out my plan of attack for getting around him and his dog with every stride I took. But at the last second (literally, the last second) the guy suddenly decided he saw me and thought he was moving out of my way, but actually moved right into me. My knees knocked into his knees, causing an excrutiating pain to run up the side of my leg. Hello inflamed IT band!

Thousands of people use the Seawall daily, and yet, there are some real jerks who think it was built just for them and no one else. You know the kind of people I’m talking about, the ones who walk five-by-each, taking up the entire lane, completely oblivious of others trying to get around them. Sometimes, I feel as though I’ve got Harry Potter’s invisible cape on! And, for us runners, we don’t have too many words that we can get out when asking someone to please get the hell out of the way. I usually start off with “On your left!” And if that doesn’t work, I try “Excuse me!” And if that doesn’t work, well, I get a little irritated: “Come on guys, MOVE!”

Today, a group of women that I had to squeeze myself through didn’t exactly appreciate my frustration. Had they moved I would have extended a polite “Thank you” as I did for others, but they didn’t so I was forced to tell them to move. It’s their fault, really. But given their reaction, I’m guessing they didn’t take it that way. “This lane is for walkers!” they shouted as I stormed through them. And so, I shouted back, “And you’re supposed to share the damn lane!” I kept going so I had no clue what else their nasally voices had to say, and I really didn’t care. I mean, seriously, the narrowness of this path is really only suitable for two people to walk side-by-each and even then, at times, that’s too much, especially when you’ve got people coming from both directions. Do you really need to walk in a Red Rover style line? Do you really need to inconvenience everyone else around you? Do you really want me to plow right through you, because I’m kinda tempted. Just saying …

Given my initial excuses for not going out, I was quite shocked at how well I felt on the run. I had loads of energy (again, it could have been the adrenaline) and for practically the whole run, I was shocked every time the beeps from my Garmin sounded indicating a walk break – I just had one didn’t I? I only really started to feel fatigue in my legs at about 17 km – right around the time I hooked up with a friendly face.

Mario and I stopped for some much-needed refreshment at the Granville Island Hotel. I was feeling the need for H20 the entire run; the water bottles in my fuel belt just didn’t cut it today, and I drank two glasses of water at the hotel … and a beer too 😀

I know you’re all waiting with baited breath to hear all about my adventures in Edmonton (and my goodness, there were a lot!) but the evil one in my head has already gone to sleep, and my eyes are pretty close behind her. But I promise to tell all tomorrow (well, maybe not all :D). And let me just say, it will be well worth the wait!

2 thoughts on “Battle of the Seawall”