I knew something wasn’t right, could feel it in my bones, my legs, my feet. But I kept going … and going … and going. I had directions, Big Ring directions, which for most people probably border on the obsessive with the amount of detail in them, but for me are a necessity.

You see, I get lost. A lot. It doesn’t matter how often I have walked, ran, cycled or driven an area, I will inevitably get turned around re-seeking that area. I get lost in the town I grew up in,  the town I currently live in, heck, I even get lost trying to find my way home again. Directions have absolutely no meaning to me, I don’t trust GPS’, I can’t read maps, and seriously, what the heck is up with that Never Eat Soggy Weiners compass cross that you learned about in Grade 3 – it doesn’t work!

This morning I had an eye specialist appointment in Vancouver to check and see if the pregnancy is causing disturbing blood spots on my retina (more on that in a future post). And the plan was for me to walk from West Broadway to the Running Room in the West End where I was to pick up mine and my moms packages for the Starbucks Women’s Walk/Run tomorrow. The trip should have taken 40 minutes…

Big Ring gave me two options, which I failed to study before getting the dilation drops in my eyes, which make everything blurry for hours. Big mistake! But I did ask, before leaving the loft, which direction east was coming out of the office, based on the first point in one of his options. He told me, the way I came. 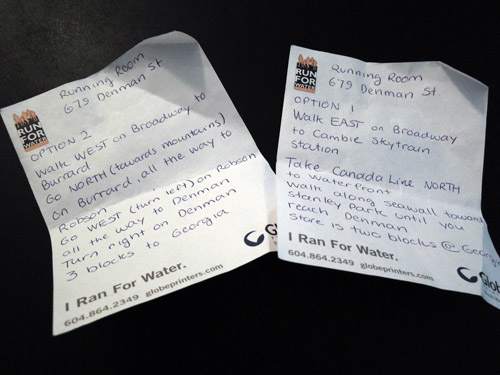 After the eye appointment, I spent a good 10 minutes (despite Big Ring’s use of larger script) with directional option 2 practically glued to my eyes, trying to figure out how to get from point a to point b. I left the office, turned right, and started walking. Two seconds in though, I remembered, no, that’s not the right way, I have to go left. I turned around and continued on my way.

But the thing is, with every step I took, a nugget of doubt grew in my belly. The directions were to take me over the Burrard Street Bridge, which I’ve gone over hundreds of times, and never, not once, have I ever gone this way to get to that bridge. But then I thought, hey maybe Big Ring’s just trying to give me a longer stroll, so I continued on.

After awhile, I figured I’d get some added clarity. I pulled out my iPhone map app and typed in Burrard Street, Vancouver. A map pulled up indicating that I was in the Mt. Pleasant area. I started walking with the app, and by all accounts it appeared I was walking in the right direction, so I kept going.

But it didn’t take long for nasty thoughts to fill my head: My god, where the hell is he sending me; Longest frickin’ walk ever; Is he trying to kill my legs??? Finally, after walking for nearly an hour, I called the culprit.

Yeah, so I was nowhere near where I should have been. I could have walked back, but my blood sugars were fast plummeting, so I hopped on the bus, with the intention of getting off at Granville, to continue the trek in the right direction. But, guess who missed her stop? Yep, that was me. So another bijillion blocks later to get back up to Burrard. Are you kidding me? 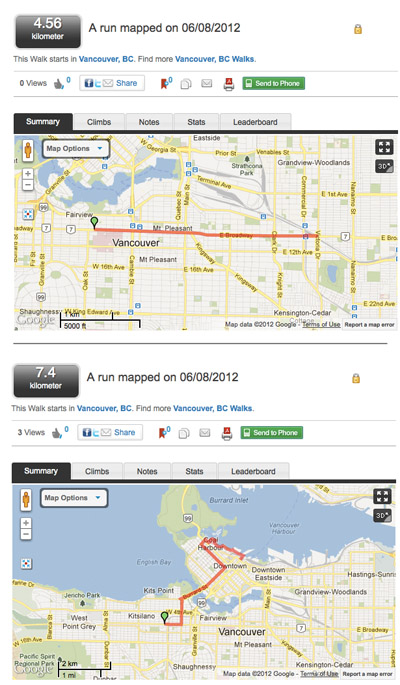 My day in maps.

After picking up the walk packages, I sluggishly hoofed it over to Coal Harbour, my old running grounds. 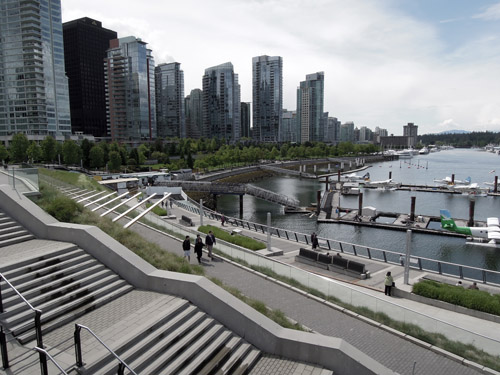 Being back here again had me longing for my running shoes.

Twelve kilometres, a slice of banana bread, a less than impressive Whole Foods sandwich, a chat with a four-year-old girl from London, and a pair of throbbing legs, feet and buttocks later, and I was finally back on the Skytrain heading home… praying I got on the right train!