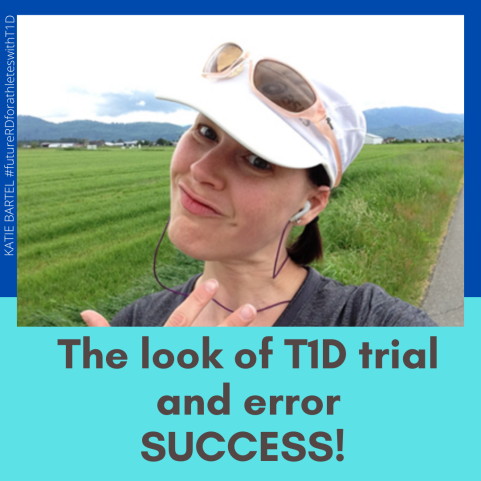 My feet hit the pavement early in the morning.

They felt a bit heavy; the chilli the night before was not the usual pre-fueling dinner, nor the wisest. My breathing was laboured. There were longer silences between my running partner and I.

But the pace was strong. There were bursts of extra speed intermittently interspersed. My legs powered up the hills, not letting the mental struggles get in their way.

And my blood sugars, a straight line hovering around 7.0 mmol/L from start to finish!

I was beaming before I’d even stopped, so excited at the BG awesomeness of this run.

Unfortunately, Dear Diabetes had a beam of his own in store for me

For those with type-1 diabetes, we know that management of diabetes during sport isn’t just about the during part.

Today, let’s focus on the after.

So, that’s a positive.

Back to my Saturday:

I started the run with a BG of 5.8 and 3 Swedish Fish (~15g carbs) swimming through my blood stream. I knocked my basal down to -65% for the duration of the 56-minute run. I didn’t take in any more fuel as I didn’t need it for the run, nor for my blood sugars with my BG averaging in the low 7s.

Post run, I jacked my basal up by 65% for 1 hour. I ate 2 protein pancakes with raspberries and peanut butter on top (40g carbs) and dosed accordingly.

My blood sugars increased to 10.6 mmol/L within a half an hour, and hovered between 10-11 mmol/L for 2.5 hours. Had I not increased my basal, they would have been significantly higher post run.

But by 3 hours after, they were dropping fast.

I spent the next 4 hours fighting lows. No matter how many Starbursts and Skittles I stuffed into my mouth, they kept going down, with only 20 minutes of reprieve here and there.

And then they went up again for about 2 hours, before bottoming out again.

By the time I had gone to bed, they had finally normalized.

Or, so I thought.

I checked my blood sugars at 3 a.m. and got a big fat LO on the screen.

So what do the recommendations say?

The textbook guidelines tell me I should have a snack before bed that includes low glycemic carbohydrates (~20-25 grams) and protein – without bolusing insulin – to reduce risk of nocturnal hypoglycemia.

Reality tells me that is just bloody ridiculous.

Reality tells me that if I did that I’d be facing highs all night long. No matter how insulin sensitive I am, I know my body, and I know my body would revolt if I were to eat carbs prior to sleep without any insulin.

Other, less conventional strategies include:

A quarter cup of almonds with a few veggies on the side has less than 5g of carbohydrates, not enough to raise blood sugars, but with their protein and fat content, the release of the carbs they do contain are delayed and may be enough to hold off the nocturnal lows until morning time.

This one is in the recommended guidelines, but I feel it’s less ridiculous than the other one mentioned and may actually work for some.

The key with these strategies is to clearly document them, we need to write down exactly what we did and how it affected our blood sugars to see if it actually works for us.

We need to check our blood sugars in the night (at least for the first couple of tries) to see if the lows were held off.

We need to NOT beat ourselves up if our trial and error efforts don’t work, but rather keep trying until we something that does work.

This disease is not textbook, so there’s no way textbook guidelines are suitable for all.

I’d love to hear how you manage your post-run BG fluctuations?

2 thoughts on “T1D in sport: trial and error”