Okay, so maybe climbing the Grouse Grind, and drinking beer and eating decadent cheesecake the day before a long run wasn’t the smartest running decision made. The first 5 km felt like my body was twisted up into a million knots and it was not going to untwist kindly, oh no. I was struggling to maintain a constant pace, or even just a good pace, I was slow, oh man, was I ever slow. And my ankles and calves were so super tight, I was begging the running gods to take pity on me. And yet, I wouldn’t have changed a thing. That cheesecake, ohhhhh that decadent Princess-famed cheesecake, was worth every tight step endured.

After two and a quarter years of living in the loft, Mario and I finally had my brother, sister in law and three nephews over for dinner on Saturday. And because it had been so long (my sister in law, who is one of my most favourite persons on the planet, had never even seen our place) I had to roll out the red carpet, had to. And in my world, that red carpet involves cheesecake, a cheesecake that takes 5 hours – FIVE HOURS! – to prepare. It is that good!

This is one of my cheesecakes of yore, I was so enchanted by the most recent cake I forgot to take a picture.

But as with most delectable treats, it came at a cost. Picture a sloth in sneakers, that was me on the Seawall Sunday morning for those first 5 km. And then all of a sudden, I don’t know, it’s like I jetted into a phone booth, spun around a couple times, and came out SuperPrincess! My pace sped up, my muscles loosened up and those aches and pains, gone. The running gods listened! Now, if only the Seawall cyclists (who, I’m pretty sure are the worst cyclists in the world) could learn to follow the rules of the road and NOT nearly take me out TWICE, it would have been a near perfect middle and end run. 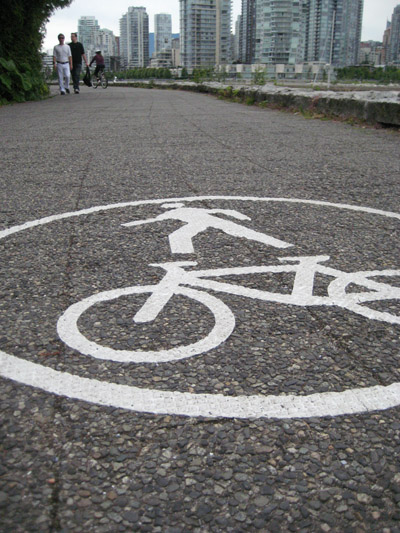 Some cyclists need to go back to kindergarten and learn how to share. Just saying…

Did you see that? Blood sugar perfection. Normally when I see my BG anything under 9.0 before the start of a run, I get paranoid that I’ll have a mid-run low and end up slurping back some sugar, but yesterday, I pretty much just let it ride aside from one Swedish Berry. And along the run, I didn’t take any gels, or pancakes or any solid nutrition for that matter, but rather I took my dietitian’s suggestion and diluted juice in with my water, which seemed to work well … although, not really sure how swell it will be once I start hitting the higher mileage. But luckily for me, I’ve got some pretty amazing running chicks, who (I had completely forgotten) had purchased me some Hammer Perpetuem Extreme Endurance Fuel for my birthday last month (along with some super delicious chocolates! Like I said, amazing!) that’s supposed to deliver stable, long-term energy with no stomach distress or glycemic spikes. Sounds pretty perfect, now I just got to give it a go.

Have you used the Hammer line of endurance fuels? What did you think?

And look who I found! Another reason to love the Seawall, great lunch dates!

9 thoughts on “Sloth in sneakers”